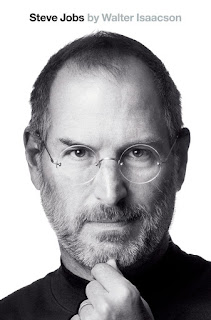 I think Isaacson has done a very hard thing here, and that is to be fair in writing about a giant in the tech industry who was incredibly revered in his own lifetime and yet incredibly polarizing. To write a Biography of such a man and publish it shortly after his death is a hard thing to do because society is still swimming in the aura that was Steve Jobs. Imagine someone writing a biography of George Washington while he was alive which pointed out all of his flaws and quirks. Isaacson has faithfully consulted primary sources and people close to Jobs, interviewed Jobs himself, and then unashamedly painted what I believe (but rather have to intuitively imply after reading) a true picture of the man. For better or for worse, that picture is of a genius who was a consistent jerk. But those are the facts, and although The author does write about and concede that Jobs did much to transform the technology and personal computing industries, building one of the most innovative and successful companies in the world, he also doesn't shy away from pointing out how much of an asshole he was with people. Sometimes Isaacson even drifts into a sort of chiding tone, which I think goes too far: "The nasty edge of his personality was not necessary. It hindered him more than it helped him." Thankfully, most of the time the author stays above that level of narrator–involvement.
On a more subjective level, I was very interested to be learning about the history of Apple and the contributions it made to the computing industry. Some examples of this would be that the Apple II was hugely influential in the personal computing industry, pretty much inventing the category, and even more so with the Macintosh in 1984. Also developing the first mass-marketed version of an operating software using a GUI (Graphical User Interface, instead of lines of prompts using code, you actually visualized things like a desktop, pages, icons, etc.)
If you are interested in Apple as a company, Steve Jobs, or technology in general, then this book would be a good read for you. It is rather long (571 pages not including the index and whatnot), but it is written clearly and coherently, so the pages go by quickly.
Posted by J.R. Snow at 1:53 PM