Why Old Cars are the Best Cars

Do you know of people who throw away food simply because it's been in the fridge for some time and in their mind "too long"–when the food is still quite fresh? Or people who only use bath towels once before washing them again? the automotive equivalent of this, in my humble opinion, is throwing away a used car after it hits 100,000 miles or 10 years, whichever comes first.

I used to work at a very high-end Carwash as the Assistant Detail Manager. No, that didn't mean I walked around annoying people with my OCD (ok maybe a little) it meant I interacted a lot with rich and semi-rich people who viewed their cars as "old" or "worn out" if they had over 100,000 miles. Some thought a car had "high mileage" at 75,000 miles (shows you the success of oil companies' marketing "high mileage oil" for cars with over 75,000 miles!). These people usually would ditch their car after 5-7 years and buy a brand new one, the car equivalent of a popularity-seeking cheerleading captain (nothing against cheerleaders) dating the hottest guy on the football team, whoever it happened to be. Now, for people with lots of money, that's fine for them. If you have the money, good for you. But what is distressing is that this mindset is seeping into the younger generation–the kids and grandkids of these people, who don't have their kind of money, but DO have their "worn out at 100k" mindset. It is leading broke college students to sign their life away on a 3 year-old Honda Civic that costs $13,000 because they are afraid of getting "a junker" that would be unreliable. Hogwash I say! I assert that for $2,000 and $200 in fluids and basic parts, you can wrangle up a car with decent reliability for many years, and put that other $10,800 towards something else, like your worthless overpriced debt-inducing pride-puffing psychology Masters degree. The following list is humorous, but liberally sprinkled with truth:

1. Old cars are the best because: They don't have those stupid alarm systems that seem to catch you breaking into your own car more than it's worth to have them scream at a thief breaking into it. In fact, if a thief breaks into your car, I bet it will only serve to make him just as mad as you are when it goes off on you, i.e. mad enough to kick the door or punch the steering wheel. Now all you have is a dinged door and an airbag to replace, in addition to the...jumper cables he stole? half-empty Gatorade bottle? Seriously, who really leaves something super valuable in their cars? I know that when I open my 17 year old cars door, I'm greeted with silence.

2. Old Cars are the best because: you aren't worried about cosmetic scratches. Truly, I tell you, happier you will be with a car's paint littered with scratches BEFORE you owned it than half the scratches on a car where you endured their indelible imprinting while owning it. You know what I mean? it would suck to have to witness every time I scratch up or ding a newer car, but magically, all that stress is wiped away when the car already has them. Be happy with your cars growing character, not stressed!

3. Old Cars are the best because: They are usually simpler and easier to fix. Now, I'm not an auto mechanic, but I have looked under the hood of lots of cars. and new cars freakin' have plastic covers over most of the mechanical parts now, and have much more electronic gadgets that mean there are more things to break, and more things to have to know how to fix. Older cars, especially ones with manual levers and things instead of electronic buttons, won't break as easily. And you better believe that stuff in the guts of the car is more electronic-based than mechanical-based as well, which tends to be less reliable. Simple is better! The older the car, the more used parts and parts-cars for you to choose from. Older cars are generally cheaper to maintain and repair. Left: 1994 Lexus. Right: 2014-ish Lexus. 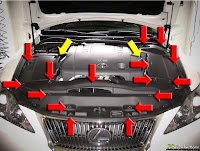 4. Nobody is gonna steal/break into this, when it's parked next to that: 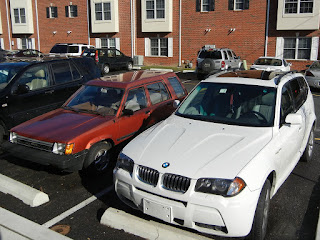 Your new car is my old car's thief prevention system.

5. Maintaining/fixing cars is fun and manly. Are you a man? are you feeling a bit low on manliness? instead of punching things or chewing tobacco, might I recommend buying an old car and fixing it up. Even simple things, like changing your own oil, magically impart manliness. Expect energy and self-manfidence (made that up, nobody steal it) to abound and girliness to disappear like Ron Swanson's double of Scotch as soon as he pours it. Level up from there by changing your Power Steering fluid using spare transmission fluid and a turkey baster, like me, or by walking to the auto parts store after breaking down, buying the new part, and then installing it in a parking lot using your tools (Like my manly brother).
On this flipside, if you are a single lady, you should still get a beat-up old car. Why? because you can use your old clunker as the crucible upon which to manlify any potential mate! And if he can't perform basic fixes on a hunk of metal, how is going to take care of you, a MUCH MORE COMPLICATED hunk of flesh and spirit? 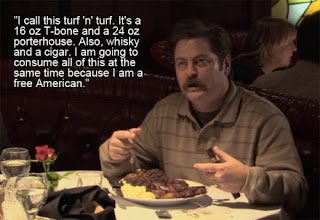 6. Insurance costs are waaay lower. Also, taxes for my 2000 Toyota Tacoma were like 30 bucks for the year I think. Beat that!

Those are a small smattering of simple reasons why old cars are the best. As a parting example:

Here we have a 1994 Honda Civic Sedan with 152k and $1,600. Power everything, automatic transmission, 4 doors. Should get around 28 mpg highway. Perfect college car. Engine/tranny has at least 100k left with only minor upkeep. Get your new Honda Accord Sport when you graduate, son!