Short Review of "Thank You for Arguing" by Jay Heinrichs

This is a good book on rhetoric. The author communicates well and connects his ideas to the audience by couching them with plenty of examples. This makes this book an easy read despite growing over the years to be almost 500 pages long. However, There are a few issues: 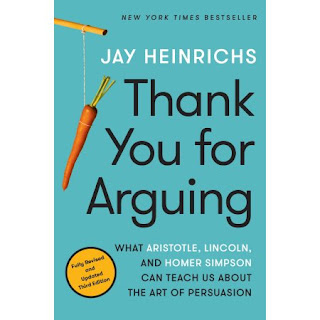 1. He divorces truth from rhetoric. Many times in the book he talks about the uses and goals of rhetoric in very utilitarian terms–ie, use rhetoric to convince your audience of your position, regardless of its truth. For instance, we read: "In Rhetoric, the audience's beliefs are  at least as important as the facts." (pg. 130). But...only if the goal is simply to get your way, rather than to communicate the truth! Rhetoric should be used to persuade people to believe that which is TRUE. But in this book, rhetoric is separate from virtue.

2. He renames all of the logical fallacies. This is unhelpful and confusing. I would rather learn the "Red Herring" as it is called, and not renamed and referred to as the "Chewbacca fallacy".

The appendices at the end, which allow the reader to test himself, are very good, and the website (arguelab.com) looks good as well.


Just be aware of the utilitarian ethics and the secularism in this book. Rhetoric is a power that should be used to support logic and argument in the search for truth, not as a way to cover truth up in the name of getting your own way.
Posted by J.R. Snow at 6:27 PM